The First Page of Your Novel

Whether you're a writer or not, knowing what attracts you to books can be a helpful way to sort through the millions out there. When do you know you're going to love a novel? How does the cover help you decide? The title? The first line? The first page? The first chapter?

There's been a lot of advice for novelists to make sure the first line is an eye catcher, the first page riveting. Otherwise, an agent might put it down, as well as a prospective reader.

So what is a writer to do?

The other day I picked up the book IQ84 by Haruki Murakami. The title of this novel doesn't do much for me - I have no idea what it means, so it remains a riddle. But it also isn't offensive, nothing that would turn me off. Same about the cover. It's simply okay. The eyes of a Japanese woman peer out from it, but there is a graphic design component to it that appears modern and a little surreal, his specialty.

There's a title to the first chapter: Aomame: Don't Let Appearances Fool You. I have no idea what the first word means (we find out in the first couple of pages). The warning which follows is almost cliché, but it still serves to pique my interest.

The first sentence is nothing extraordinary. "The taxi's radio was tuned to a classical FM broadcast." However, through this line, my ears (one of my senses) are involved, and a scene unfolds.

Within the first paragraph, there is a sentence that speaks to me of the author's style, a simile: "...like a veteran fisherman standing in the bow of his boat, reading the ominous confluence of two currents." It's a talented line that impresses me.

By the end of the third paragraph, I believe I want to read this novel. Why? Because of these lines: "This may be the most important proposition revealed by history: 'At the time, no one knew what was coming.' Listening to Janáček's music, Aomame imagined the carefree winds sweeping across the plains of Bohemia and thought about the vicissitudes of history."

My conclusion: there's intellectual depth to tis novel. The only hesitation is that it's about a thousand pages, so I'm not 100% sure.

Which leads to the idea of meeting the reader's expectations. The cover, title, and first page of a romance novel is going to be different from those of a sic-fi fiction novel or a literary work.

Here's another example: One of my favorite reads this year was Yanagihara's A Little Life. The cover: a man's face, a man who looks to be in pain at least, perhaps emotionally tortured. Dead on. The title, mystifying. What is a little life? Is the phrase an oxymoron? The first line is a long sentence - it perhaps warns the reader not to expect choppy in vogue sentences here, and also to expect literary style above popularity.

And the reader is thrust into a scene immediately, even rejected in a sense by a potential neighbor, then rejected by the agent showing YOU an apartment, and yes, somehow the experience of the character feels like your own. Such is the talent of a writer like Yanagihara. This is also a very long novel, maybe 700 pages or so, but I am pretty certain in an instant I'm going to read it. Why?

Because the last highly significant component in the beginning of your novel is content! A Little Life is about complex relationships among four young men, so this at once fascinates me. More emotion is evoked in the first several pages than throughout some entire works, and this hooks me.

I've spent some time thinking about the beginning of novels. I've written three and am working on a fourth. The first three are a trilogy, so the first few paragraphs of the first novel have to introduce, in a sense, not only the first novel but also the other two.

So, let's consider an example of mine: The Search For Intelligent Life On Earth: A Story of Love. The title is intriguing, and the subtitle helps the reader know what to expect. This is not sic-fi but not exactly a love story. Otherwise, it would say "a love story." 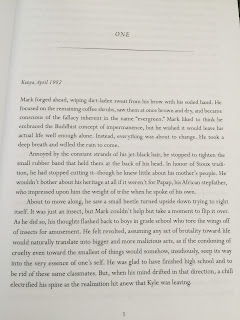 The first line, again not brilliant, brings the reader into a scene: "Mark forged ahead, wiping dirt-laden sweat from his brow with his soiled hand."

The first paragraph introduces a spiritual philosophy and the human character's flaws through this line: "Mark liked to think he embraced the Buddhist concept of impermanence, but he wished it would leave his actual life well enough alone." The reader now knows this is not just a light story. There's something profound that will be addressed, so the novel may be literary or cross-genre.

By the third paragraph, we have more depth and an element of style revealed through this line: "...any act of brutality toward life would naturally translate into bigger and more malicious acts, as if the condoning of cruelty even toward the smallest of things would somehow, insidiously, seep its way into the very essence of one's self." Now the reader knows for sure this isn't a romance novel.

So, what do you want to do?

1) Pick an attractive cover design, or at least one that's not offensive to most. One that hints at what's in store between the covers.

2) The title should properly reflect what the reader should expect. If you're writing a piece of eroticism, "Hot and Bothered," may be an appropriate title. Conversely, the same title can be used ironically to signify a non-fiction work on febrile conditions, or a biography of a manic politician, for example.

3) The first line should transport the reader into a scene, so she is immediately involved in real time.

4) The first page should reveal style, intent, and purpose of the novel, so a reader will know if he will enjoy the book (or at least have a strong suspicion one way or another). Yes, we want to appeal to as wide an audience as possible. But sometimes I wonder if by making commercial appeal the main priority, we are negating the artist in the writer.